Battery’s first production ‘Homecoming’ drew inspiration from the Dunbar Battery’s history as a World War 1 hospital and its location close to the former Dunbar Barracks through which thousands of men passed on their way to the Front.

Performed in summer 2018, it focused on the end of WW1 one hundred years earlier. Telling the story of the Reverend James Kirk, the chaplain of Dunbar Parish Church who was the first chaplain to sign up in WW1. He served three tours of duty during which he wrote letters home to be read to his congregation.Rev Kirk was killed in April 1918 and never made it home to Dunbar however his memorial stone sits in Dunbar Parish Church, yet his contribution to the town and his story is little known today. It also told the story of Violet Elizabeth Fraser, a nurse in The Battery Hospital and the only woman on Dunbar’s WW1 memorial.

Written by by Sophie Good

With original songs by Karen Dietz

Sophie Good’s emotive script (and James Kirk’s original letters), the way Kirsten and Philip changed characters so believably and dealt so well with the fast moving story (or should I say stories) and changing emotions, Karen’s soulful singing, all blended together so well by Andy Corelli, resulted in an absorbing and provoking production.”

“Homecoming last night was very moving and a superb performance. The whole enterprise was so clever, I’m so glad we got to see it.
On the walk home we studied the local war memorial which made your performance even more poignant. Please pass on our appreciation to all those involved.”
“I thought the actors did an amazing job jumping between characters and making all of the characters believable. The wonderful singing and the songs themselves added beautifully to the play. The story that was well told and it wasn’t just me that shed a tear a tear at the end”
“Homecoming was just amazing. I have not seen a better play in many a year. A real gem! The only two actors were brilliant in portraying both humour and sadness in their different roles. Really clever use of the simple props and the direction was superb. The poignant use of singing throughout just added to the whole experience.” 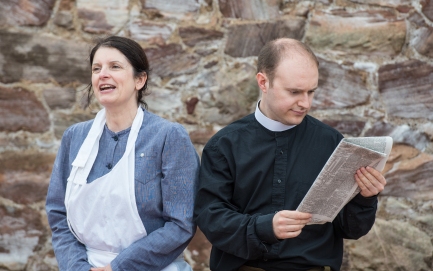 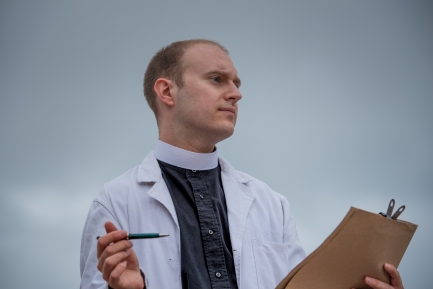 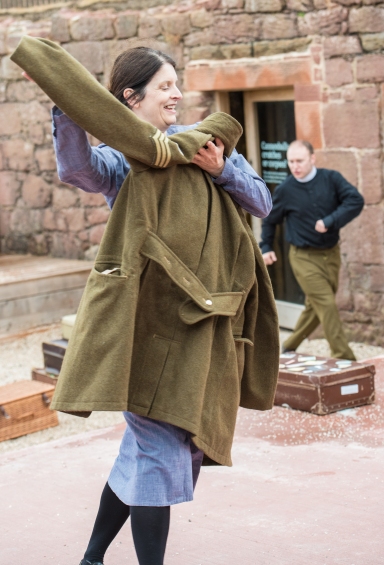 Writers Note (from Sophie Good)
Homecoming’s journey started with a springtime visit last year in which our two actors Kirsten and Philip declared whilst admiring the new amphitheatre ‘wouldn’t it be wonderful to perform here’. And so set in motion a process of research and investigation working alongside myself and director Andy Corelli.
With credit to Will Collin and the Dunbar and District History Society as well as the excellent resources at the John Gray Centre – the team were able to discover Dunbar was teeming fascinating stories from the First World War in it’s centenary year. We decided to use two local heroes – Rev James Kirk and Sister Violet Fraser – both featured on the town’s war memorial.
Bringing their stories to life has been an absolute joy – and the addition of Karen Dietz’s moving compositions has really brought emotional heart to our play.